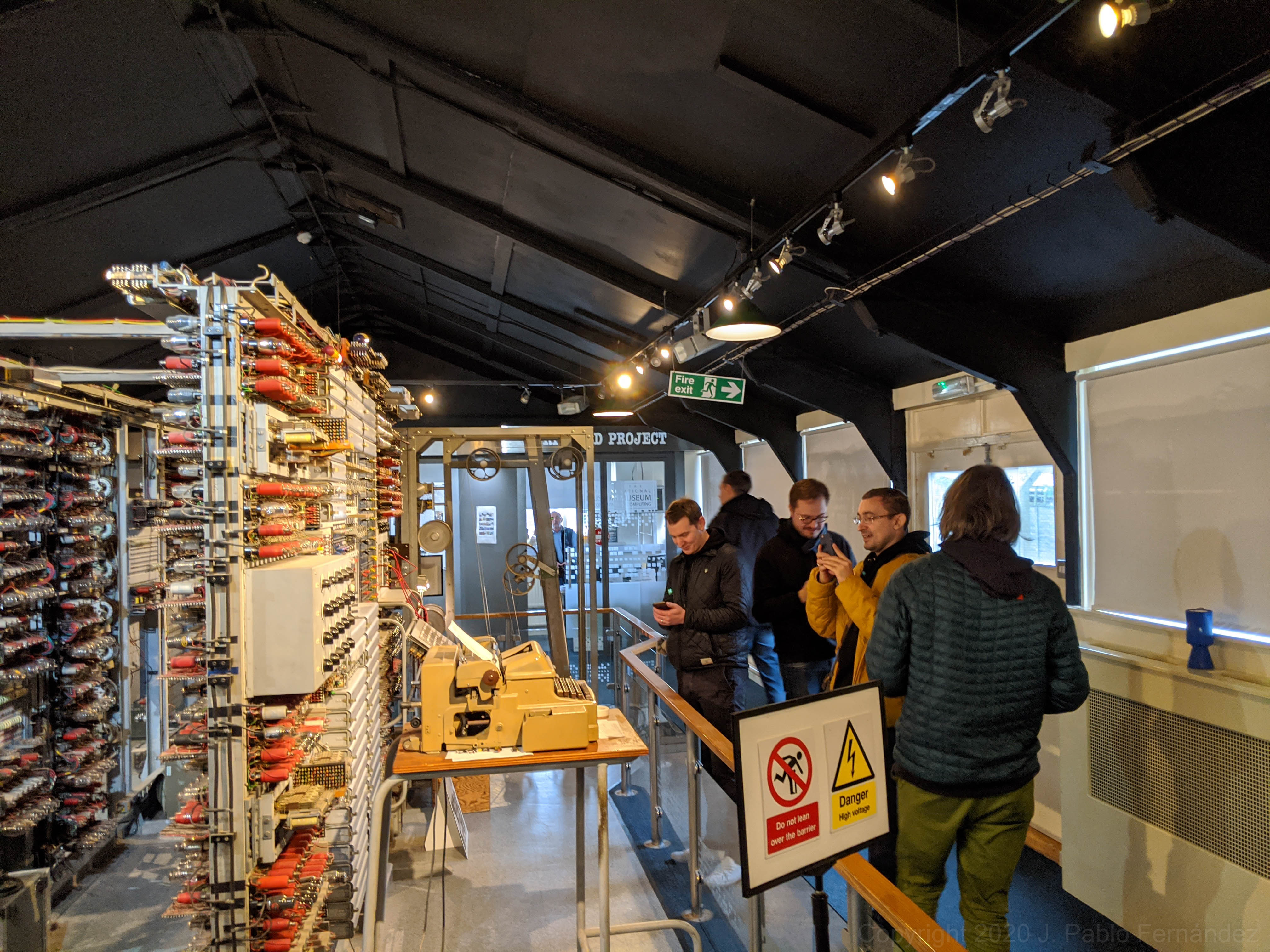 I’m very proud of what I achieved at Wifinity

Disclaimer: I’m blatantly tooting my own horn here because I’m proud of what I achieved, and very proud of what my team achieved. This is a personal story and a shout out to some awesome people.

Today Jordan Bundy, someone I hired when I was at Wifinity sent all of us this message (pic included):

Today is the one year anniversary of the Wifinity software engineering team meeting face to face for the first time. I built this team completely distributed from the start and once I had the phase 1 complete, after months of being team mates but never having met, we had our first get together. Everyone was flown to London, where Wifinity is based, and we spent a week working, doing design/architecture, talking to all heads of departments, getting to know each other, and having geeky fun.

Might have been the best business trip I’ve been on.

What geeky fun? We all went to Bletchley Park to learn about code breaking during WWII and the birth of computers (where else?):

On the day we all met, everybody was joking and talking as though we were old friends, like we knew each other already. I was ready to play host, to be the ice breaker, to work hard to make people comfortable… I ended up having to work hard to keep up instead.

At Wifinity I was in charge of all the technical aspects of a big Intellectual Property acquisition that had many moving parts that needed to come together in a 6 month program. We collectively wrote many hundreds of thousands of words of documentation that ended up being indexed, searched, tidied up and so on.

The hardest part was probably migrating all of the servers from one company to another with minimal disruption to the wifi users. My goal was to have 100 or less complains and would have given us all a pat on the back for less than 10. In the end we got 0. Well… actually in the middle of the server transition we got 1 complaint, but turned out it was for a competitor service. That was pretty funny. A lot of credit for this migration goes to Chris Nash and Sam Whannel. If you need an SRE/DevOps/SysAdmin/SysOp type of person, you can’t go wrong with them.

On the software development side the team did a marvelous job at taking over a very old code base with lots of technical debt, a lot of problems.

Goran Jovic focused on security and he found some nerve wracking issues that we scrambled to fix. I remember internal conversations at Wifinity discussing pentesting; I think having Goran on the team was better than most pentesting.

While we patched those security fixes, Rémi Sultan built an entirely new reusable authentication system that matched the needs of the company so that an entire class of bugs would be unlikely to ever happen again. He didn’t do it because it was on the roadmap but because he felt strongly about having a robust product, and he was correct.

On the frontend side of things I had the pleasure of working with Grzegorz “Greg” Pabian. He’s an expert at many things. He was our resident Git wizard, teaching everybody the black arts of advance git and helping us when we got stuck with a broken branch. He could also have big-architecture thinking on the frontend so when he started re-writing and modernizing code, what he produced was a thing of beauty.

Jordan Bundy also started on the frontend but it became clear to me that he’s a talented generalist. He didn’t stay on the frontend, he ventured into the backend and beyond, working with stakeholders. When I was leaving Wifinity, I recommended him to take over as manager of the team.

And on the QA side of things I worked with Twayne Street. He’s good and fast at testing software. He would find so many rare bugs and his reports were so detailed and helpful. He started writing an automated testing system for Wifinity that looked pretty good. I really wish I would have seen it come to fruition.

I’m very proud of what all of us achieved together at Wifinity and I miss working with this team a lot. I’d happily work with them again, and I know they would me; until then I’ve gained some very good friends. And I’m taking suggestions for our next nerdy venue.